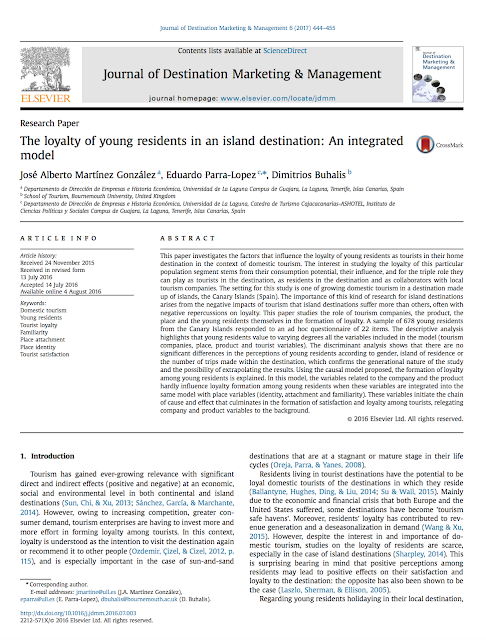 This paper investigates the factors that influence the loyalty of young residents as tourists in their home destination in the context of domestic tourism. The interest in studying the loyalty of this particular population segment stems from their consumption potential, their influence, and for the triple role they can play as tourists in the destination, as residents in the destination and as collaborators with local tourism companies. The setting for this study is one of growing domestic tourism in a destination made up of islands, the Canary Islands (Spain). The importance of this kind of research for island destinations arises from the negative impacts of tourism that island destinations suffer more than others, often with negative repercussions on loyalty. This paper studies the role of tourism companies, the product, the place and the young residents themselves in the formation of loyalty. A sample of 678 young residents from the Canary Islands responded to an ad hoc questionnaire of 22 items. The descriptive analysis highlights that young residents value to varying degrees all the variables included in the model (tourism companies, place, product and tourist variables). The discriminant analysis shows that there are no significant differences in the perceptions of young residents according to gender, island of residence or the number of trips made within the destination, which confirms the generational nature of the study and the possibility of extrapolating the results. Using the causal model proposed, the formation of loyalty among young residents is explained. In this model, the variables related to the company and the product hardly influence loyalty formation among young residents when these variables are integrated into the same model with place variables (identity, attachment and familiarity). These variables initiate the chain of cause and effect that culminates in the formation of satisfaction and loyalty among tourists, relegating company and product variables to the background.