Dr Susanna Curtin attended the Tourism Education Futures Initiative2016 conference in Kamloops, British Columbia, Canada  June 26-29th in order to present her paper entitled ‘Animals and tourism: extending moral obligations of care’. As educators it is our job to instil, awaken and encourage notions of care in our students.  We can do this by highlighting areas of study which may otherwise be overlooked in a ‘business’ orientated tourism-centric degree programme; one of these is the way animals are misused in the tourist experience.  According to Fennell (2013) there are over 100 million animals working for the purpose of entertainment and an additional one million animals in zoos.  The purpose of this paper is to urge tourism educators and scholars to include animal welfare in their tourism education and research in order to raise awareness. This is a notion supported by Fennell (2013) who highlights the importance of animal welfare in tourism studies. 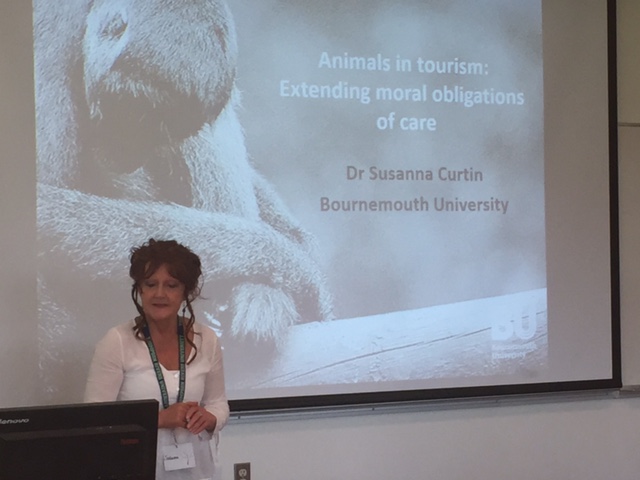 Animals feature in a number of settings both captive and non-captive. Current research suggests that 70% of tourist excursions either directly or indirectly involve animals (Turner, 2015).  Animals are used as transport, as photographic props and as entertainment.  Many activities which were once deemed acceptable are now questionable as they are known to cause suffering and pain. The public dissection of Marius the giraffe in Copenhagen zoo, the shooting of Cecil the Lion in Zimbabwe and the Blackfish film which prompted outrage at the truth behind SeaWorld’s killer whale performances are recent provocative stories that have caught public attention. This has put animal welfare and tourism firmly on the agenda.

There is some evidence to suggest that public support for the use of animals for entertainment is beginning to shift (YouGovUK, 2012). Broom (2010) argues that more people think that poor animal welfare is morally unsustainable; that people who keep animals have a duty of care towards them.  Generally tourists do not enjoy seeing unhappy animals. The Born Free Foundation in the UK are working with Global Spirits and ABTA to persuade the tourism industry to only promote tourist attractions that adopt appropriate animal welfare guidelines.

International tourism graduates are at the forefront of these important tasks: a) to expose and challenge the mistreatment of animals in tourism and b) to change public (tourist) opinions as to what is an appropriate tourist experience. Using extensionist environmental principles which extend moral obligations of care to other species, this interactive presentation will ask delegates to draw upon their own emotional responses to examples of animal uses in tourism; thus highlighting the issues scholars, students, NGOs and the industry need to address. The presentation included photographs which depict a variety of animals in questionable settings and performances.