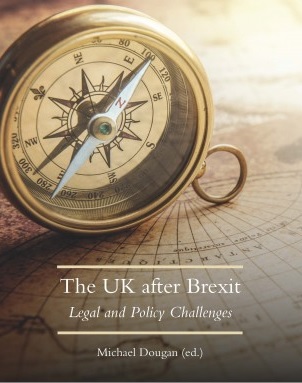 Back in 2016 CIPPM hosted a symposium on the effects of the withdrawal from the European Union on UK intellectual property law. Now that we have reached the turning point of the UK/EU negotiations not much clarity as yet been made on the future of IP in the UK – for instance on the fate of the Unitary patent and the highly “Europeanized” areas of IP law, such as trade marks and design.

Dr Marc Mimler has contributed two book chapters on the effects of Brexit on IP:

The first called “Intellectual Property Law and the Brexit: A Retreat or a Reaffirmation of Jurisdiction?” was co-authored with Dr Luke McDonagh (City, University of London) and analyses the possible ramifications of Brexit. The chapter, was published in The UK After Brexit: Legal and Policy Challenges edited by Professor Michael Dougan (University of Liverpool).
More information about the book including a list of contributors can be accessed through the Intersentia website.

The second chapter, “The Effect of Brexit on Trademarks, Designs and Other “Europeanized” Areas of Intellectual Property Law in the United Kingdom” was written for the upcoming publication by the Centre for International Governance Innovation (CIGI) and the British Institute of International and Comparative Law (BIICL), edited by Oonagh Fitzgerald and Eva Lein. The chapter analyses the impact of Brexit on trademark and design laws but also discusses the effects of Brexit on the laws of geographical indications (GIs), the doctrine of exhaustion and the interface of intellectual property (IP) and competition law.

The chapter is part of a series which will be published as a book entitled Complexity’s Embrace: The International Law Implications of Brexit in spring 2018. It is available here: https://www.cigionline.org/publications/effect-brexit-trademarks-designs-and-other-europeanized-areas-intellectual-property