I think this is the first update I’ve written from Bournemouth in the last few months so it’s great to be back, especially as we seem to have brought back some of the hot weather from overseas…

Although I may be back in the UK, admittedly I haven’t been for very long! Along with 40 or so BU staff and students, I have just returned from the final global Festival this month, which was held in one of the fastest growing economies in the world – China. During the week, we hosted a varied programme of academic, professional and alumni events covering three cities, Zhuhai, Guangzhou and Beijing, and engaging with over 900 people outside of BU in the process. You can catch all the action from the Festival in China in our Storify and read more in my blog. As part of the week, BU students also had the opportunity to actively contribute to the Festival through presentations and research dissemination as part of BU’s Destination China Summer School 2017.

We now turn our attentions to the final leg of the Festival where we will showcase all that we achieved over the last year during the Festival of Learning in Bournemouth. The full Festival runs from 8th to the 12th July with over 140 events across the five-day period. This year’s programme promises to capture your imagination and provide a fantastic opportunity to interact, debate and connect with BU’s staff, students and partners. On the final day of the Festival – the 12th July – we will celebrate the achievements of Global BU with a packed programme of exhibitions, panel sessions and lectures. The programme is available online and the registrations are now open – so do book your ticket now!

This month was also an opportunity for us to host the first ever Global Challenges Summit at BU. The Summit aimed to inspire students to work on three UN Sustainable Development Goals of: No Poverty; Reduced Inequalities; and Good Health and Wellbeing. 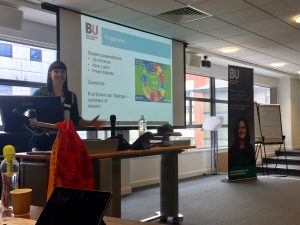 Over 120 students from the Health and Social Sciences Faculty had the opportunity to immerse themselves in global developments through a series of guest lectures and workshops delivered by global organisations including Save the Children and WaterAid as well as the Regional Development Agency in Kosovo. Students also had the opportunity to hear from the world of practice through guests such as the health tech entrepreneur, Nuno Almeida, CEO of Nourishcare. To find out more, check our Storify of the event.

I was delighted to attend British Council’s Going Global Conference in London this month, where we heard from a range of fantastic speakers, such as Aromar Revi, UN SDSN Lead, Phil Baty, Editorial Director, Global Rankings at THE, and Prof Janet Beer, Vice-Chancellor at the University of Liverpool. Some of the hot topics under discussion included the role of universities and HE in supporting city-regional economies, connecting global cities to global knowledge and talent, and addressing global challenges.

The opportunities for Syrian refugees to access education was high on the conference agenda through the British Council and indeed the issue raises a global challenge for the HE sector as a whole. Such steps towards reducing poverty and inequality and promoting inclusivity on a global level build on some of the themes we discussed at the Global Challenges Summit at BU earlier this month.

Talent was also widely discussed and particularly the role of HE institutions’ role in nurturing highly skilled local, national and international talent and their subsequent contribution to cities and communities. This is exactly what underpins our very own Global Talent Programme, and I am looking forward to celebrating the first graduates of this new programme next month.

Party Manifesto Pledges on HE

The three main parties introduced their manifestos ahead of the general election on the 7th June.

The Conservatives manifesto indicated that it is their intention to build on their previous work on the HE Bill and TEF and explicitly reiterated their previous stance that overseas students will not be excluded from the net migration target but to also “toughen the visa requirements for students, to make sure that we maintain high standards.”

The Liberal Democrats pledged to hold a second referendum on the terms of the Brexit deal. The party also promised to reinstate PSW visas for graduates in STEM subjects in employment within six months of graduating and pledged to introduce a more transparent approach to issuing visas and measuring international student numbers.

The most discussed manifesto among the HE community was from Labour, which pledged to reintroduce maintenance grants and scrap tuition fees for students in UK HE. Various responses from the sector have questioned the viability and sustainability of these proposals.

Common amongst them all though was their pledge to continue to collaborate with the EU on science and innovation projects such as Horizon 2020 and Erasmus+.

The impact of Brexit

All the above, was set against the backdrop of two very interesting reports on internationalisation, international students and the relationship with Brexit. The International Student Survey 2017 by Hobsons highlighted that 68.5% of prospective students say the EU referendum results had little impact on their interest in UK HE. The survey argued that the weakened pound and national welcome campaigns, such as #WeAreInternational may well have played a positive role in this shift in attitude.

At Global BU, we have always prioritised the welcome we extend to international students and I’m pleased to say that the International Commencement Ceremony – the unique and special way BU welcomes our global talent to BU, to Dorset and to the UK, is now in its third year and will be held this year on the 21st September 2017. To all new international students – tickets will be available soon!

We all Stand United

Finally, may I take this opportunity, on behalf of all of us at Bournemouth University, to send our thoughts and condolences to all the family and friends of those have been so horrifically affected by the devastating events in Manchester in the week. Whilst those responsible for this cruel and indiscriminate act are set on creating and widening divisions, it is now more important than ever for us to come closer together to help overcome the many complex challenges facing today’s and tomorrow’s global community.