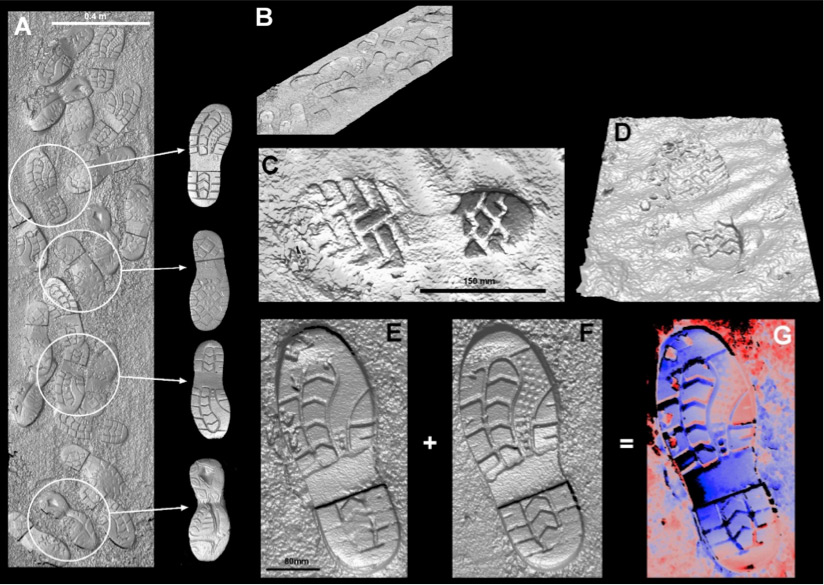 Welcome to this Natural Environmental Research Council (NERC) Funded Innovation project. The aim is to translate experience, know how and computer software developed for research into fossil footprints into an integrated package of use to police and forensic services both in the UK and overseas.

Footwear impressions provide a source of evidence within a range of criminal investigations including gathering of criminal intelligence. A potential suspect will leave foot or footwear impressions en route to, at and while exiting, a crime scene. This not only allows a sequence of events to be determined but may also link a suspect to a scene if their footwear is distinctive, for example as a consequence of damage or wear. Indoors crime scene officers deal mainly with two-dimensional traces; impressions left by a foot tracking mud, blood or other bodily fluids. Three-dimensional tracks, the proverbial footprint in the flower bed, are common at outdoor scenes. Traditional methods for the collection of three-dimensional traces consist of photography and casting, supported by two-dimensional pattern recognition that can type a footwear sole to a particular make or model of shoe. Three-dimensional imaging is now available as an alternative or complementary option, particularly as algorithms for digital photogrammetry have improved dramatically in recent years allowing easy operational deployment. No expensive three-dimensional laser scanners are required, only that a crime scene photographer take a few moments to collect additional oblique photographs of footwear impression. Consequently, three-dimensional analyses of footwear impressions are now already possible at a routine operational level, but remain the exception rather than the norm.

As part of previous NERC funded research into ancient footprints we developed a range of methods and freeware to facilitate the three-dimensional capture and analysis of footprints. Engaging with police as part of this work demonstrated the interest and potential of such methods to enhance the analysis of three-dimensional trace evidence especially by allowing statistical analysis of differences between tracks and/or footwear. Currently comparison is done primarily via visual inspection rather than by quantitative and statistical comparison.

Working with the Home Office Centre for Applied Science and Technology and the National Crime Agency we are employing a software engineer to draw on this research, practice and existing code to create a single integrated software application for the capture, analysis and presentation of three-dimensional footwear evidence which will allow routine operational deployment by police and forensic agencies both in the UK and overseas. We hope that this will change the fundamental cost-benefit ratio associated with the collection of this type of evidence, such that three-dimensional imaging can become the norm rather than the exception. Software of this sort needs to be available to all parties involved in forensic jurisprudence – the defence as well as the prosecution – without handicap of cost. As such our proposed software will be made available as freeware rather than commercialised, which will also assist with user adoption. This knowledge translation has the potential to contribute to criminal investigations and in the safeguarding of society.

As the project develops we will post further details on this site.