On Tuesday 27 February, the students in MA Advertising were given a workshop by Sean Parkin, Head of Creative at London advertising agency FKC. 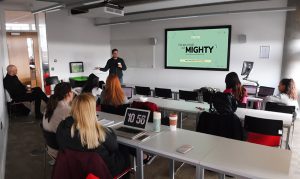 Sean is a regular contributor to the MA Creative Direction unit.

Based on a brief which is currently ‘live’ in his agency, Sean took the group through the stages of creative ideation, including:

* the development of an appropriate proposition (based on the identification of the key benefit),

* the crafting of an effective strapline and

* the design of an image to illustrate the proposition and convey the identified benefit to the TA.

Sean was so impressed by one of the ideas proposed by the students (congratulations to Marie Neoralova and Amy Rivers) that their idea may make its way into the campaign.